“Master after master from Leonard, to Rembrandt, to Bierstadt produced works that inspired, uplifted and deepened us. And they did this by demanding of themselves the highest standards of excellence, improving upon the work of each previous generation of masters, and continuing to aspire to the highest quality attainable…

…but something happened on the way to the 20th century.”

Thus starts artist Robert Florczak’s video from Prager University entitled “Why Is Modern Art So Bad”.  I recently found this video a few days ago when a co-worker linked it to me and I decided to write my personal thoughts about the subject. As a short disclaimer however, I am not an art major but one who appreciates art, which I define as an expression of human creativity and imagination. 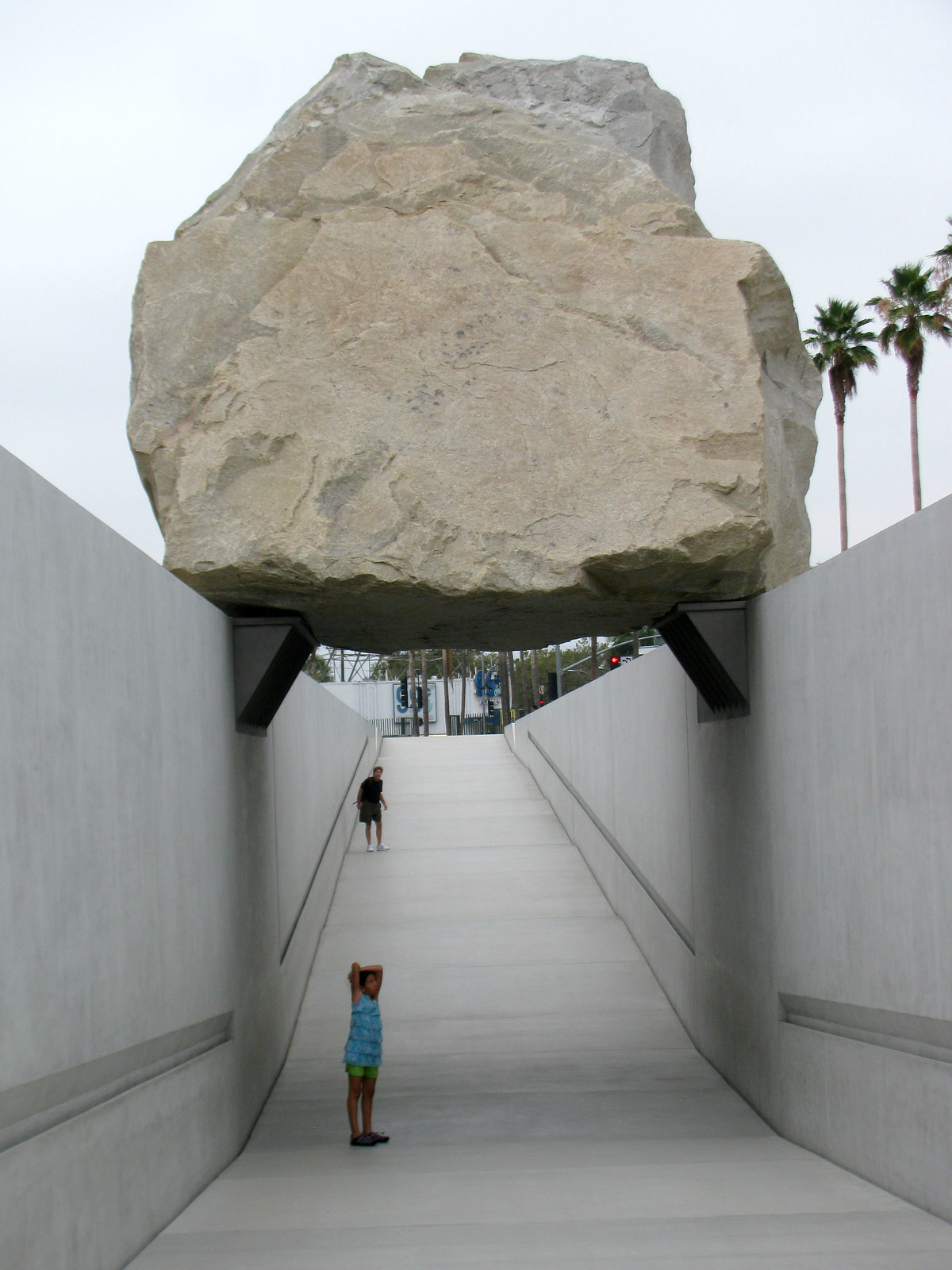 Florczak continued “The profound, the inspiring and the beautiful were replaced by the new, the different, and the ugly. Today the silly, the pointless, and the purely offensive are held up as the best of modern art.”

He then went on citing some pieces of art, comparing Michaelangelo’s rock carving David to the Los Angeles County Museum of Art’s Levitated Mass and saying “That’s how far standards have fallen. How did this happen?” Among the artworks he mentioned were Chris Ofili’s Holy Virgin Mary and Marcel Walldorf’s Petra, both of which drew controversy following their exhibitions. The former was a mixed media painting, made of cow dung and cut outs of pornographic images made to resemble the putti or cherubs. The latter was a silicone and metal sculpture of a policewoman, pants down, genitals exposed and urinating.

“Without aesthetic standards we have no way to determine quality or inferiority,” he continued. “Not only has the quality of art diminished, but also the subject matter has gone from the transcendent to the trashy. Where once artists applied their talents to scenes of substance and integrity from history, literature, religion, mythology, etc., many of today’s artists merely use their art to make statements, often for nothing more than shock value.”

“Artists of the past also made statements at times, but never at the expense of the visual excellence of their work.”

If you noticed, I used contemporary art in my title instead of modern art which was used by the video. I feel that it is necessary to differentiate between the two. 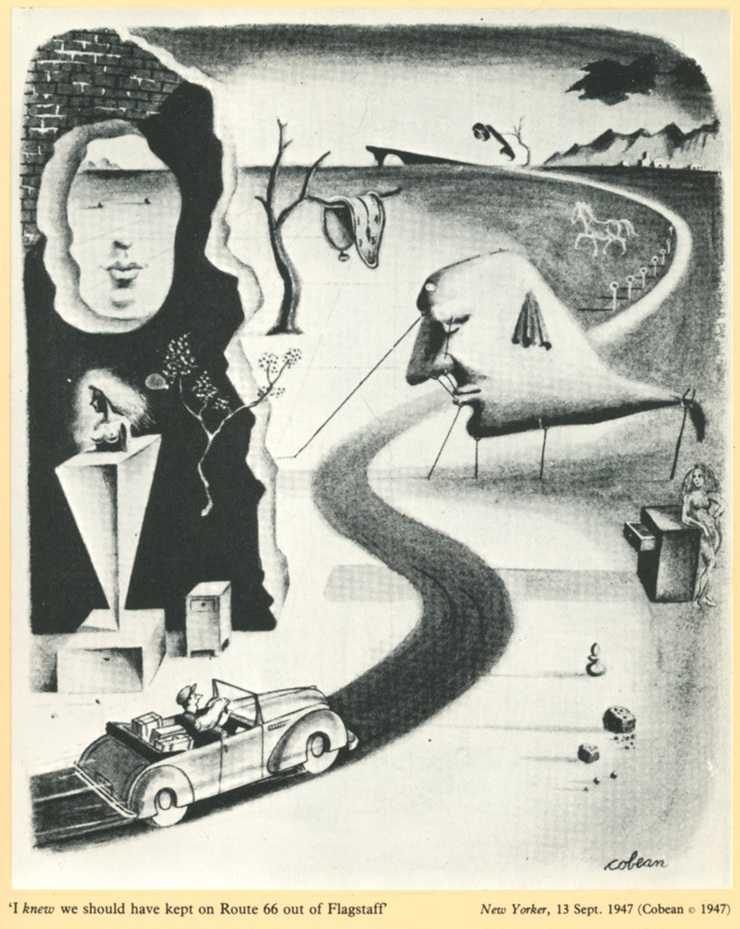 Modern art refers to the art produced roughly between 1860s to 1970s, characterized by moving away from the concrete ideas of traditional art to abstraction with regard to style and philosophy.

Contemporary art on the other hand refers to the art produced in the present time, roughly defined as the period following postmodern art which in itself a reaction to modern art. (Still with me?)

The video probably uses it colloquially to appeal to a larger number of people, but keep this distinction in mind at least.

Beauty in the Eye of the Beholder

Florczak’s tirade in the video primarily concerns aesthetic relativism, or in simple terms,the “beauty is in the eye of the beholder” concept. According to this philosophy, there is no universal standard of aesthetic, that art is subjective and depends entirely on the individual or to the culture where it belongs. 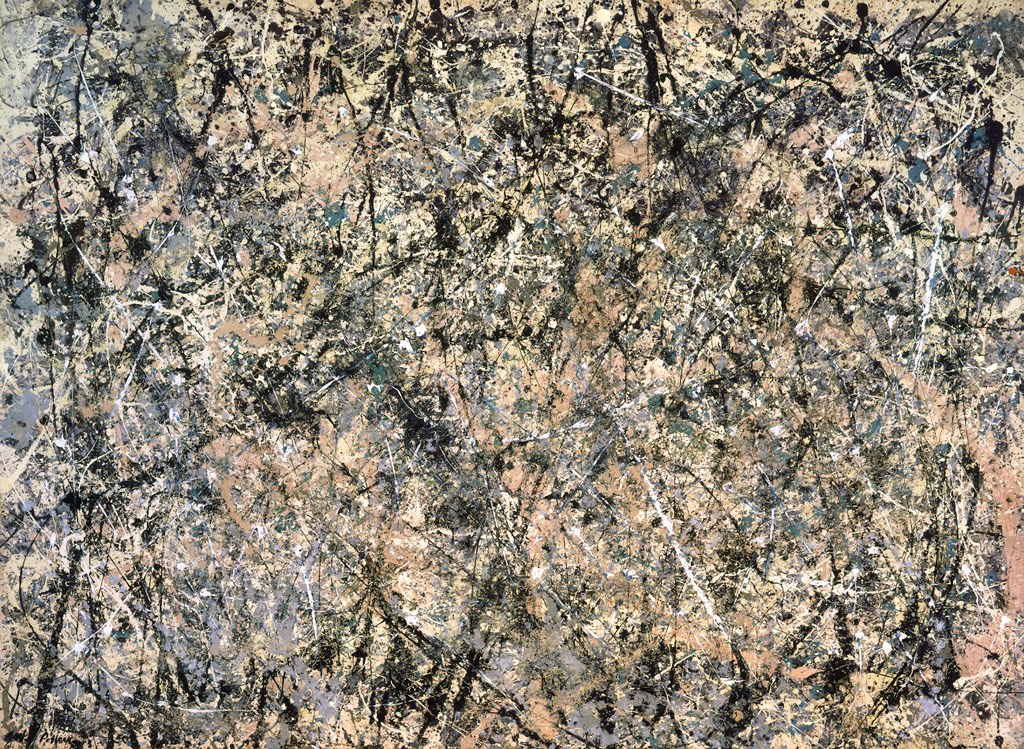 He argues that there is a need to have a set of aesthetic standards to determine quality or inferiority. He cited using a detail of his studio apron and presented it to his students who accepted it as a Jackson Pollock painting. “It’s nearly impossible to differentiate between the two.”

It is obvious that Florczak is someone who will rank each art movement from history, put Classical and Renaissance art at the top, Impressionism as an honorable mention, and delete contemporary art in that list altogether. But I digress.

Like others before me, I would argue, how could we objectively measure what is beautiful and what is ugly? What is high quality and low quality? What is art and non-art? 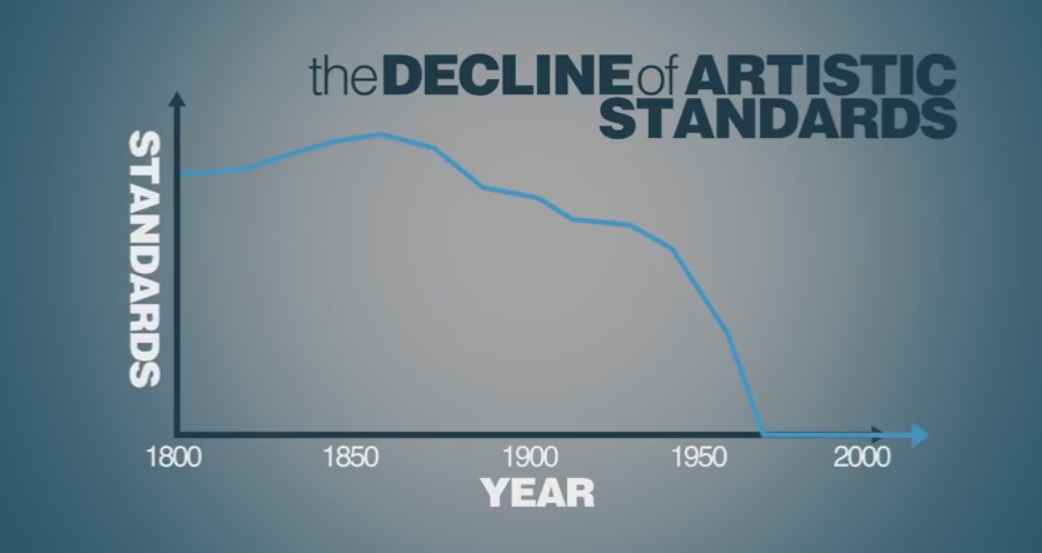 The video reminded me of a scene in Dead Poets Society when Professor John Keating was discussing an introduction on their textbook Understanding Poetry.

The author of the book suggested using two parameters in judging poetry, perfection and importance. “As your ability in evaluating poems in this manner grows, so will your enjoyment and understanding of poetry.” Professor Keating replied “Excrement.”

And I agree. Putting such parameters on art diminishes the actual visual and emotional stimulation that one gets from art pieces.Art is supposed to subjective, something that evokes a response from the viewer. Contemporary art aims the same thing, albeit in a different medium.

I admit that sometimes I do not understand some pieces of contemporary art but I am not discounting their value as art pieces. Contemporary art, along with all other art movements, is contextual. For instance, check this sculpture, Wenchuan Steel Rebar by Ai Weiwei.

Someone might say “Alright. It’s a sculpture made of rusty steel rebar, from Wenchuan, wheverever that is. It’s made to resemble waves? What about it?”And that person is correct. You wouldn’t appreciate an artist who just took old steel and assembled it in a wave-like pattern.

Let’s put Ai Weiwei’s sculpture in context. In 2008. the province of Sichuan in China was hit by an earthquake, with the epicenter at Wenchuan County. A lot of school buildings collapsed, killing more than 5,200 schoolchildren. An investigation found that the schools were poorly built due to corrupt government officials and contractors.

Ai Weiwei collected steel rebars from the earthquake site and he and his team spent the better part of two years straightening each twisted steel and arranging it in this form to resemble a fissure on the ground.

In addition to this, the artist created a list and accumulated 5,385 names, from which he created the piece Remembrance, an audio piece stating each children’s name. It runs for 7 and a half hours.

Most likely, your opinion on the piece changed. We appreciate art that speaks to us, that we can relate to ourselves, or appeals to our humanity. Some of you might not get it or might not appreciate it. 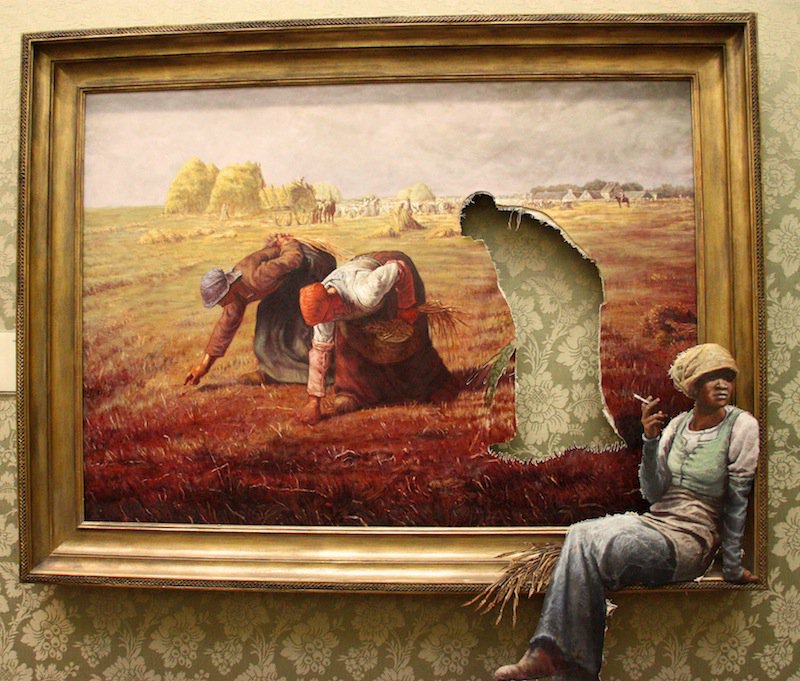 You might ask, “wouldn’t this subjectivity diminish the value of art? Don’t we need some sort of aesthetic standards to differentiate art from non-art?” To which I answer “Why can’t we have both objective and subjective aspects of art?”

As an avid moviegoer, I enjoy some movies panned by critics and got bored at some which are lauded by them. Rotten Tomatoes judged Liam Neeson’s Taken as “undeniably fun with slick action, but is largely a brainless exercise” but that didn’t diminish my enjoyment and appreciation of the movie’s actions scenes. 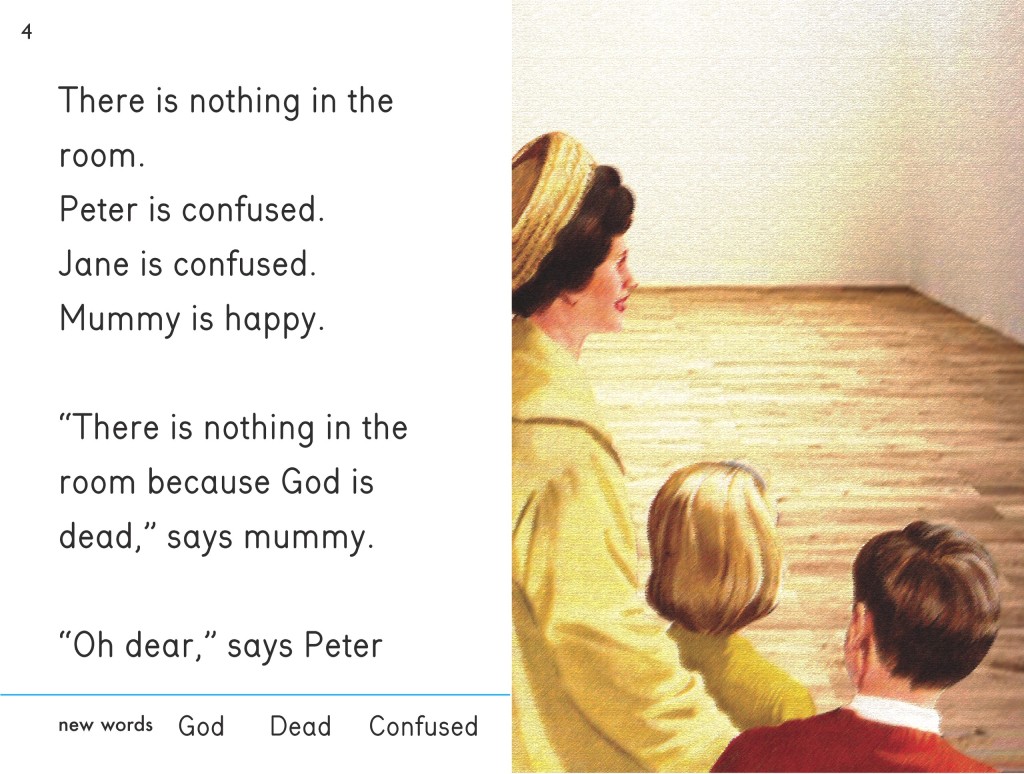 We Go To The Gallery by Miriam Elia

Critics can state factors to objectively judge art, and you can do that, too. But these objective factors are subjective upon the individual. You might put more value on the brush strokes and the technique used, but I value the subject matter more than the execution.

I somewhat agree on his one point, referring to museum heads, gallery owners, and critics as “naked emperors of art, for who else would spend $10 million dollars on a rock and think it is art.”

And therein lies our disconnect on why a layman thinks some contemporary art sucks.

So why does the average person think some contemporary art sucks?

“A two-year old could’ve done that!” This is the usual retort whenever popular news media reports on some new art acquisition or exhibition. “Why would you pay millions of dollars for it?”

Let’s face it. Some of the art pieces shown today suck. The classical time was better. The Renaissance art were better. The Impressionists were better. Why? Because of a phenomenon called selection bias. Ahh yes. The Renaissance (Virgin and Child with St. Joseph)

Think of it this way. We are seeing Art History‘s highlight reel and comparing it to the making of the Contemporary Art movie, complete with their magnificent cinematography and awful bloopers.

Throughout history, people have ridiculed art movements who dare challenged the established tradition. Humanity, after all, can be resistant to change. I’m not saying that change is good or bad, but it is inevitable.

Another factor that we can attribute to the layman’s reaction is mystification. To illustrate, take this example presented by John Berger’s book (which you can also watch here) referring to a painting by Frans Hals, Regents of the Old Men’s Almshouse.

“Each woman speaks to us of the human condition with equal importance. Each woman stands out with equal clarity against the enormous dark surface, yet they are linked by a firm rhythmical arrangement and the subdued diagonal pattern formed by their heads and hands. Subtle modulations of the deep, glowing blacks contribute to the harmonious fusion of the whole and form an unforgettable contrast with the powerful whites and vivid flesh tones where the detached strokes reach a peak of breadth and strength.”

Note the use of vocabulary. According to Berger, “the visual arts have always existed within a certain preserve.” First, it existed within the confines of the artist’s studio. Next, it became a social one which for a very long time was held by the ruling class. Art is what set apart the manses and palaces of the rich from the houses of the poor. Art became a justification of the ruling class’ authority. 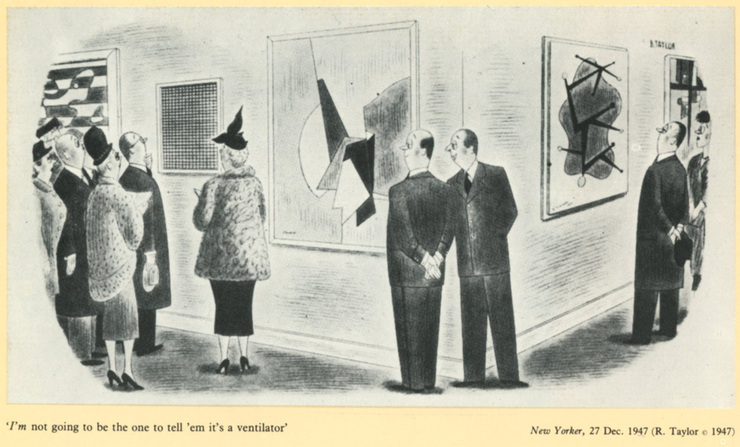 Berger states that the modern methods of reproduction have made art accessible to the masses. And understandably, they remain uninterested because of the mystified language of art.

Art is seen as elitist or pompous. Art is for pretentiously cultured people, for intellectuals who “get” what it means. Videos like the one I mentioned above only serve to propagate this kind of mindset.

To immediately dismiss all modern/contemporary art as bad without taking the effort to try to understand them is, as Prof. Keating exclaimed, “Excrement.”